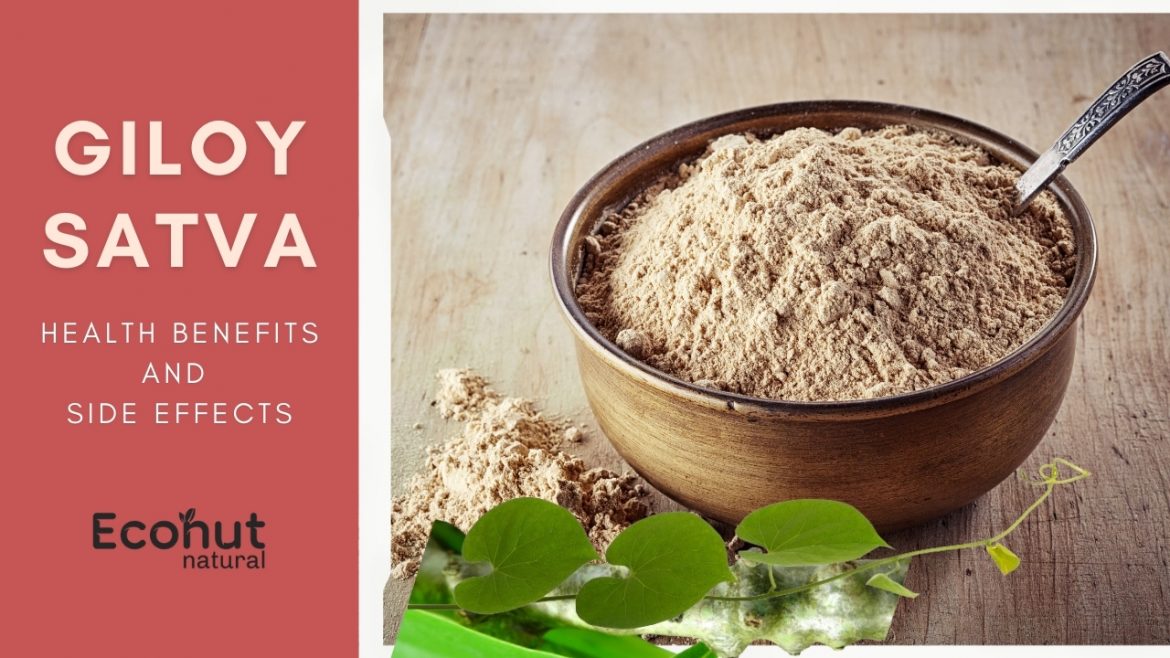 Giloy satva is a tinospor cordfolia extract, which is also known by several names, such as Giloy Sat, Guduchi Satva and Amrita sat or Satva. In the ayurvedic composition, we know as the Giloy Satva all the benefit of this medicinal herb is inherited. Giloy has been renowned in the recent past, and even experts are surprised with its remarkable medical powers. This made it a high-value medicinal plant.

Get it online: Natural Giloy Satva

Giloy satva is certainly equivalent to Amrit or elixir, and this is simply because of its curative capabilities, increasing health skills, and free nature from adverse effects. Health is not just a priority for the elderly but also for today’s younger population. It’s just those days when the older are aware of the adverse effects of allopathic medications that have trusted ayurvedic remedies and today’s young people. Ayurveda sees a surge in popularity, particularly in India, as more people become aware of its benefits. Yes, Ayurveda is no longer a traditional science. Ayurvedic medicine is currently a key element of medical research. Fortunately, ayurvedic drugs such as Giloy satva have been well-researched, and we have enough safety and efficacy proof. After summarizing several research evidence, we can conclude the following health benefits of Giloy satva:

Low immunity is a symptom of a larger problem that can affect your complete health. You are more susceptible to a variety of illnesses if you are stressed, both physically and mentally. Repeated infections can make your body weaker, and a weak body is vulnerable to various ailments. The only way out is to use Ayurveda giloy satva and make lifestyle changes. The latter isn’t achievable right away; therefore, if your immune system isn’t strong enough, you should start taking giloy satva right away. The patient will need 40 days of Giloy Satva to boost non-specific immunity.

Whether you have constipation, difficulty digesting AMA (toxin), liver dysfunctions, acidity, gastritis, ulcerative colitis, or a loss of appetite, giloy satva is the one-stop treatment for all stomach problems. In this battle of allopathy vs Ayurveda, Ayurveda triumphs. With just one ayurvedic formula, you can solve a variety of problems. And giloy satva’s effects aren’t limited to indigestion and acidity. The list of giloy satva’s advantages is extensive. Until far, we’ve only observed giloy’s involvement in boosting immunity and helping digestion, but scientists have discovered a slew of other giloy satva advantages.

Giloy is a plant known for its potent antipyretic properties. You may anticipate the same with giloy satva because it has the benefits of giloy. Giloy satva is one of the most popular ayurvedic medications due to its remarkable fever-relieving properties. It works as effectively as paracetamol but has none of the negative effects, according to multiple studies. In allopathy, a single fever-relieving drug has many adverse effects, which we can’t separate from allopathic drugs. However, we may easily eliminate allopathic drugs from our lives and replace them with giloy satva, a healthy, holistic, and natural technique to treat fever. This will not only lower your body temperature but will also address the cause of your fever, whether it is connected to your stomach or you are suffering from a fever caused by a specific infection.

Diabetes is a difficult condition that should not be handled lightly. But, on the other hand, taking drugs isn’t a nice thing to do, and it’s not good for your health. Ayurveda is the only healthy approach to cope with all of life’s insurmountable issues, and ayurvedic medications like giloy satva may assist you a lot with diabetes as well. You can manage all of the symptoms of diabetes, and you won’t have to sacrifice your entire health since you’re taking giloy satva, a health elixir. However, diabetes is more complicated than a simple fever; you may require additional adjuvants such as gandhak rasayan, ashwagandha, or Chandra Prabha vat I.

Giloy Satva For Bones And Joints:

You’ve seen a lot of the advantages of giloy satva, but there are a lot more. Giloy satva can also be used to treat joint and bone issues. Gout is a painful condition that can be treated with giloy satva. It’s a sort of arthritis, and many deals with it and painkillers daily. This is extremely dangerous to your health, and giloy satva can help you prevent it while treating gout.

Giloy, on the other hand, has been deemed ‘Possibly Safe’ after several studies. It can and is used for the conditions mentioned above, but its negative effects must be considered as any other treatment. Let’s take a look at some of the Giloy side effects that have been reported:

The medications and treatments used during this critical period are carefully chosen. Tinospora isn’t known to produce any major negative effects during pregnancy or nursing; however, it does have a limited impact. Its long-term consequences are still being explored; therefore, it is always best to avoid it and be safe.

Giloy has been reported to reduce blood sugar levels in a few situations. In such a situation, your diabetic medications will need to be modified to minimise hypoglycemia-related adverse effects in diabetic patients.

Giloy has been reported to induce constipation and gastrointestinal distress in some people. This is the most well-known adverse effect, and it should be monitored whenever therapy with it in any form begins. Giloy is available in tablet and liquid form. Constipation is a typical adverse effect of both types.

Giloy has been reported to induce constipation and gastrointestinal distress in some people. This is the most well-known adverse effect, and it should be monitored whenever therapy with it in any form begins. Giloy is available in tablet and liquid form. Constipation is a typical adverse effect of both types.

Ayurvedic medications are regarded for providing more health advantages while causing fewer adverse effects. However, it is possible not the case with all drugs. As a result, it is always a good idea to be well informed on any medicine’s advantages and side effects, such as Giloy Satva, before starting to use it. After all, today’s awareness is the key to tomorrow’s improved health.